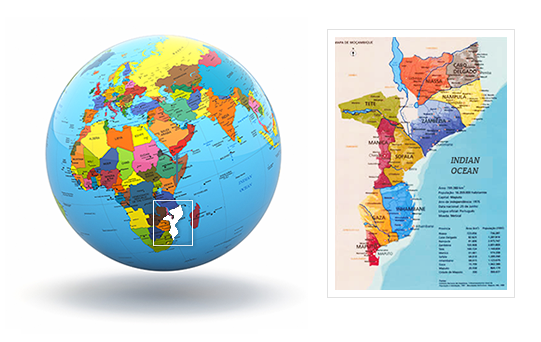 Mozambique is a country located on the eastern coast of Southern Africa. It has an area of 801,590 km2. It is bordered by Tanzania to the north, Malawi to the northwest and Zambia to the west; in the south and southwest it borders with Zimbabwe and South Africa. To the east, the country is bordered by the Indian Ocean. Mozambique has a long coastline of 2700 km - one of the most extensive coastlines in Africa. Moreover, it has an inland coast, near Lake Niassa.

Mozambique is a country with large geographic and geological diversity. In the north, it is characterized by plateaus and mountains, while the south is dominated by coastal plain. Major rivers flow through the country in the direction of the Indian Ocean: the Zambezi and Limpopo.

Mozambique has a humid and tropical climate. The average temperature ranges between 20 ° C and 31 ° C. The rainy season occurs between October and April. Mozambique has a population of over 30 million inhabitants. About 30% of the population lives in cities. Mozambique consists of 10 provinces; the country's main cities are Maputo, Matola, Beira and Nampula. The infrastructure of the country is in full development and, especially in the areas around the big cities, there is a good road network.